Human Beings Cannot Be Reduced to Their Bodily Actions

“Once you label me, you negate me.” —Søren Kierkegaard 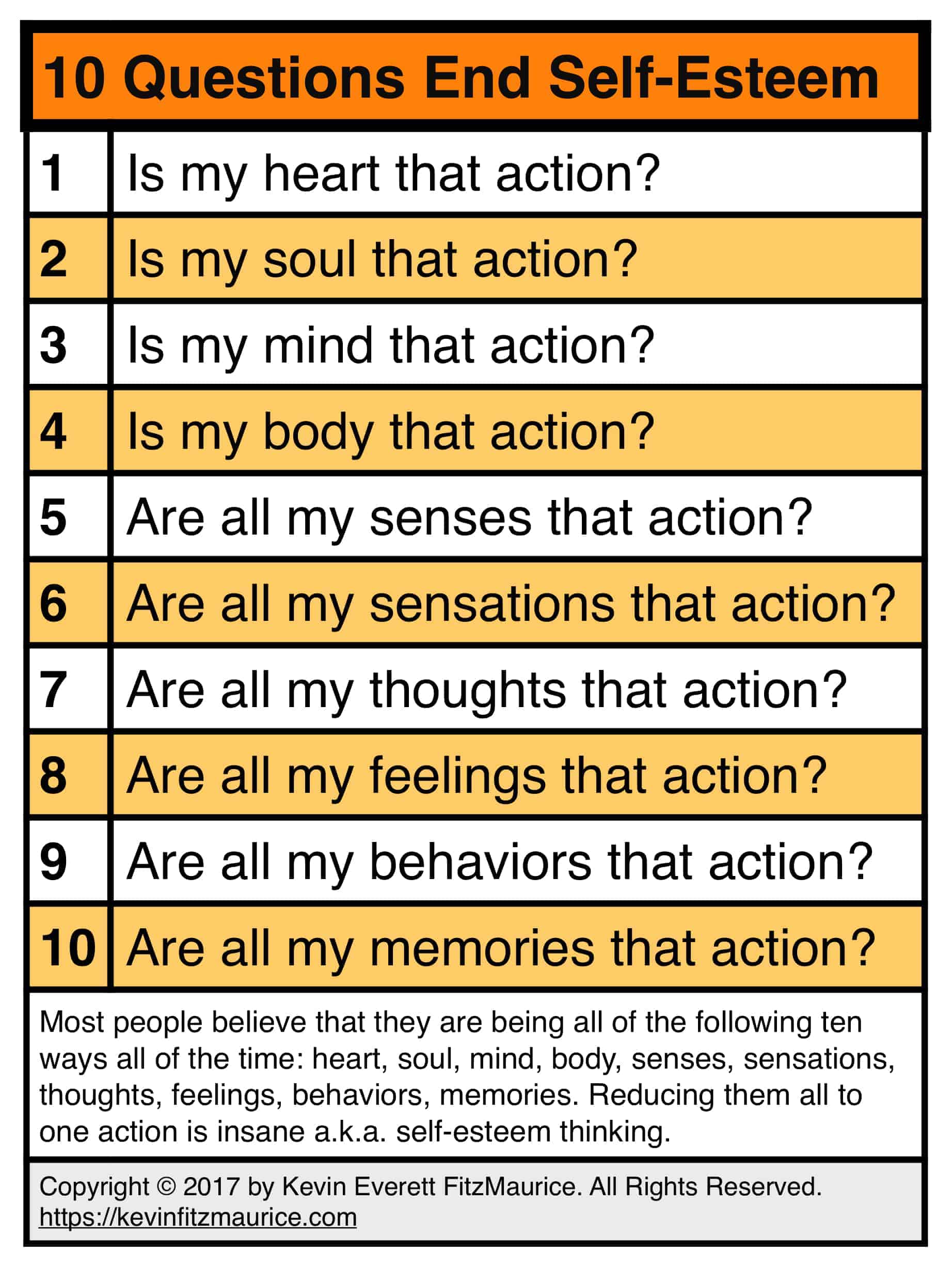 10 Parts of a Human Being ≠ Self-Esteem

You cannot be reduced to self-esteem concepts and images because you are a heart, soul, mind, body, senses sensations, feelings, thoughts, behaviors, and memories at all times.

The Answer Is “No”

Prove the Logic to Yourself

People Cannot Be One or Many Behaviors

People Are Not Names

People Are Not Self-Images

You Are a Being, Not Self-Esteem Images or Concepts of Your Physical Behaviors.

Science and self-esteem try to reduce systems to parts and pieces and wind up not understanding systems. However, many have learned the hard that the sum of the parts is not equal to the whole.

“In the case of all things which have several parts and in which the  totality is not, as it were, a mere heap, but the whole is something besides the parts,  there is a cause; for even in bodies contact is the cause of unity in some cases, and in others viscosity or some other such quality.” —Aristotle

“I often marvel how it is that though each man loves himself beyond all else, he should yet value his own opinion of himself less than that of others.” —Marcus Aurelius, 121-180 A.D.

“It is my contention that the promotion of ‘self-esteem’ has done demonstrably more harm than good, and that the prudent individual will resist the arrogant and childish temptation to ‘esteem himself.'” —David Mills, Overcoming “Self-Esteem” Why Our Compulsive Drive for “Self-Esteem” Is Anxiety-Provoking, Socially Inhibiting, and Self-Sabotaging

“Perfection does not consist in macerating or killing the body, but in killing our perverse self-will.” —Catherine of Siena

“Self-esteem is the greatest sickness known to man or woman because it’s conditional.” —Albert Ellis, Ph.D., the most famous and influential living psychologist in the world, Psychology Today, February, 2001, p. 72, in the interview, “The Prince of Reason,” with the famous psychologist Robert Epstein, Ph.D.

“The assumption being that if high-risk children could be made to ‘feel good about themselves,’ these epidemics could be mitigated. … This prescription, unfortunately, has proven to be yet another in a long list of nouveau homilies that haven’t lived up to their promises.” —John Rosemond, Plan To Build Self-Esteem Backfires, August 1996 syndicated newspaper column regarding research done at Case Western Reserve University and the University of Virginia

“The first step man takes in self-confidence, removes him so far from the confidence he ought to have in God.” —Marguerite of Navarre

“There is little reason to believe self-esteem leads to academic achievement or is even necessary for academic success. It is therefore crucial to delegitimize the education establishment’s mindless glorification of self-esteem.” —Nina H. Shokraii, “The Self-Esteem Fraud: Feel-Good Education Does not Lead to Academic Success,” USA Today Magazine, January 1998

“What others think of us would be of little moment did it not, when known, so deeply tinge what we think of ourselves.” —Lucius Annaeus Seneca, 4 B.C. ? to 65 A.D.

“You never exist quite so much as when you are not thinking.” —Friedrich Nietzsche, 1844-1900, German philosopher