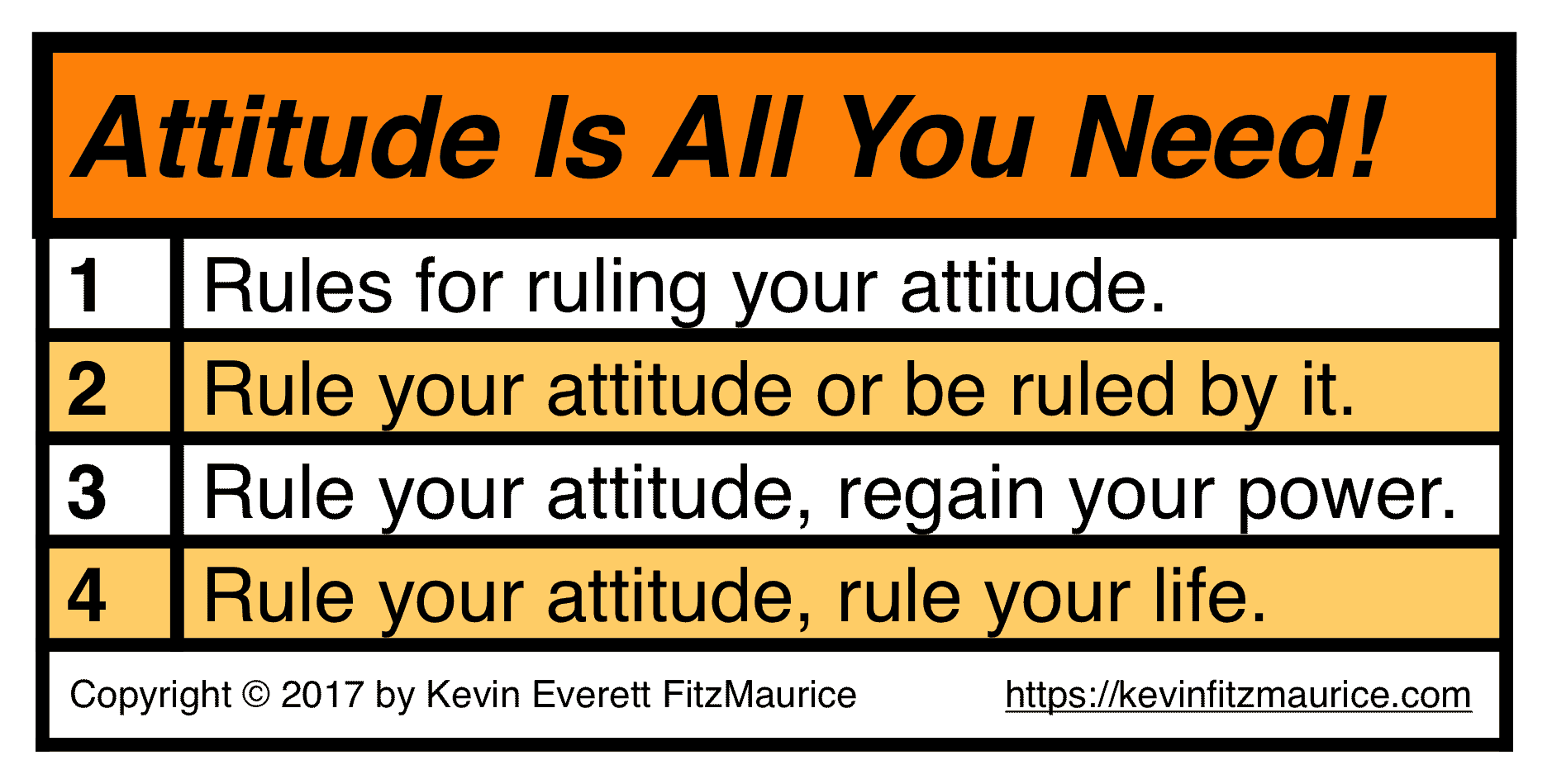 “A bad attitude is merely a reflection of how you feel about yourself.” —David Roppo

“A man is happy so long as he chooses to be happy and nothing can stop him.” —Alexander Solzhenitsyn, Soviet writer & dissident

“A merry heart doeth good like a medicine: but a broken spirit drieth the bones.” —Proverbs 17:22

“Ability is what you’re capable of doing. Motivation determines what you do. Attitude determines how well you do it.” —Lou Holtz

“Action may not always bring happiness; but there is no happiness without action.” —Benjamin Disraeli

“All superstars have a super attitude.” —Billy Cox

“All those who are unhappy in the world are so as a result of their desire for their own unhappiness.” —Shantideva

“Attitude is a little thing that makes a big difference.” —Winston Churchill

“Attitude is everything.” —Anonymous

“Be a friend to thyself, and others will be so too.” —Thomas Fuller

“Character is the result of two things: mental attitude and the way we spend our time.” —Elbert Hubbard

“Each morning when I open my eyes I say to myself: ‘I, not events, have the power to make me happy or unhappy today. I can choose which it shall be. Yesterday is dead, tomorrow hasn’t arrived yet. I have just one day, today, and I’m going to be happy in it.’” —Groucho Marx [Julius Henry], 1890–1977, American comedian

“Eat thou not the bread of him that hath an evil eye, neither desire thou his dainty meats: for as he thinketh in his heart, so is he: Eat and drink, saith he to thee; but his heart is not with thee.” —Proverbs 23:6-7

“Enthusiasm finds the opportunities, and energy makes the most of them.” —Henry Hoskins

“Everything can be taken from a man but one thing: the last of the human freedoms—to choose one’s attitude in any given set of circumstances.” —Victor E. Frankl, 1905–1997, Austrian psychiatrist

“Excellence is not a skill. It is an attitude.” —Ralph Marston

“For success, attitude is equally as important as ability.” —Harry F. Banks

“For success, attitude is equally as important as ability.” —Walter Scott

“For today and its blessings, I owe the world an attitude of gratitude.” —Clarence E. Hodges

“Good morning is not a greeting, it’s a decision.” —Anonymous

“Happiness doesn’t depend on any external conditions, it is governed by our mental attitude.” —Dale Carnegie

“Happiness is an attitude. We either make ourselves miserable, or happy and strong. The amount of work is the same.” —Francesca Reigle

“He is a wise man who does not grieve for the things which he has not, but rejoices for those which he has.” —Epictetus

“He who has a ‘why’ to live for can bear with almost any ‘how.’” —Friedrich Wilhelm Nietzsche

“If you are distressed by anything external, the pain is not due to the thing itself but to your own estimate of it: and this you have the power to revoke at any moment.” —Marcus Aurelius Antoninus, 121–180, Roman philosopher and emperor

“If you don’t like something, change it.  If you can’t change it, change the way you think about it.” —Mary Engelbreit

“If you don’t like something, change it. If you can’t change it, change your attitude.” —Maya Angelou

“If you pray with an attitude of surrender, then your prayer was already answered by giving you the right attitude.” —Kevin Everett FitzMaurice

“In everything we do, our own thoughts can help us succeed, or they can help us fail. Maintain a positive attitude.” —Catherine Pulsifer

“It is not the man who has too little that is poor, but the one who hankers after more.” —Seneca

“Leadership is practiced not so much in words as in attitude and in actions.” —Harold Geneen

“Men are disturbed not by things, but by the view which they take of them.” —Epictetus, 55?–135?, Greek Stoic philosopher

“Most folks are as happy as they make up their minds to be.” —Abraham Lincoln, 1809–1865, American President

“My one fear is that I will not be worthy of my sufferings.” —Fyodor Mikhailovich Dostoevsky, 1821–1881, Russian writer

“Nor, again, can the will be right without a right attitude of mind; for this is the source of will.” —Seneca

“Not what we have but what we enjoy, constitutes our abundance.” —Epicurus

“One will rarely err if extreme actions be ascribed to vanity, ordinary actions to habit, and mean actions to fear.” —Friedrich Wilhelm Nietzsche

“Others’ actions mildly affect me, but my attitude greatly affects me.” —Kevin Everett FitzMaurice

“Our life is what our thoughts make it.” —Marcus Aurelius Antoninus, 121–180, Roman philosopher and emperor

“Sometimes it is harder to deprive oneself of a pain than of a pleasure.” —F. Scott Fitzgerald, American writer, 196–1940

“Stormy or sunny days, glorious or lonely nights, I maintain an attitude of gratitude.” —Maya Angelou

“Success or failure in business is caused more by the mental attitude even than by mental capacities.”―Walter Scott

“Take the attitude of a student. Never be too big to ask questions. Never know too much to learn something new.” —Og Mandino

“That which does not kill me, makes me stronger.” —Friedrich Wilhelm Nietzsche, 1844–1900, German philosopher

“The best way to define a man’s character would be to seek out the particular mental or moral attitude in which, when it came upon him, he felt most deeply and intensely active and alive.” —William James, 1842–1910, American psychologist and philosopher

“The greatest happiness is to know the source of unhappiness.” —Fyodor Dostoevsky

“The last of the human freedoms is to choose one’s attitude in any given set of circumstances.” —Victor E. Frankl

“The only difference between a good day and a bad day is your attitude.” —Dennis S. Brown

“The relish of good and evil depends in a great measure upon the opinion we have of them.” —Michel Eyquem de Montaigne, 1533–1592, French essayist

“The test of a first-rate intelligence is the ability to hold two opposed ideas in the mind at the same time, and still retain the ability to function.” —F. Scott Fitzgerald, American writer, 196–1940

“There is no path to happiness: happiness is the path.” —Gautama Buddha

“There is nothing either good or bad but thinking makes it so.” —William Shakespeare, Hamlet, Act II, Scene 2

“There is only one person who could ever make you happy, and that person is you.” —David D. Burns

“There is only one way to happiness and that is to cease worrying about things which are beyond the power or our will.” —Epictetus

“To love oneself is the beginning of a lifelong romance.” —Oscar Wilde

“Tragedy is in the eye of the observer, and not in the heart of the sufferer.” —Ralph Waldo Emerson, 1803–1882, American writer and philosopher

“Unhappiness enters through a door that has been left open.” —Buddhist saying

“Unless one dream one’s finest dreams in solitude, unless one reaches the point of being able to dispense with all human company, all distraction, all traffic with the world—even the companionship of great souls and first-rate minds—unless one be self-sufficient, finding the first and best entertainment within oneself, within the depth of one’s own person, one ought to sweep one’s claims to greatness into one’s pocket there accumulated, one ought to steal away out of the sacred presence of a nature to which one does not belong.” —Johann Wolfgang Goethe, 1749–1832, German writer, poet, and scientist

“Very little is needed to make a happy life; it is all within yourself, in your way of thinking.” —Marcus Aurelius

“We should pledge ourselves to the proposition that the irresponsible life is not worth living.” —Thomas S. Szasz, 1920–, Hungarian-born American psychiatrist

“What you believe, you experience.” —J. Krishnamurti, Commentaries on Living, First Series,p. 88

“When you choose to be positive and have a grateful attitude, your life will amaze you.” —Lori Moreno

“Whenever you’re in conflict with someone, there is one factor that can make the difference between damaging your relationship and deepening it. That factor is attitude.” —William James

“Whoever is happy will make others happy too.” —Anne Frank

“You may not be able to control every situation and its outcome, but you can control your attitude and how you deal with it.” —Unknown

“Your attitude is either the lock on, or the key to the door of success.” —Denis Waitley

“Your attitude is like a box of crayons that color your world.” —Allen Klein

“Your attitude towards failure determines your altitude after failure.” —John C. Maxwell

“Your attitude, not your aptitude, will determine your altitude.” —Zig Ziglar