“Further, the ‘self’, as defined can be no thing but a bundle of perceptions, not a new simple ‘thing’. In this, I think any thoroughgoing empiricist must agree with Hume.” —Bertrand Russell, The History of Western Philosophy

“Adults are estranged from their self because they serve self-about-self and not self.” —Kevin Everett FitzMaurice

“After all, conflict arises, does it not, through the desire to be something, to be other than what is.” —J. Krishnamurti, The Collected Works of J. Krishnamurti, Volume V, p. 349

“Be true to your original nature or be false to your life.” —Kevin Everett FitzMaurice

“Beings are living, and doings are dying.” —Kevin Everett FitzMaurice

“But inwardly we are as corrupt as the person who sits in an office and plans war —because, we want to be somebody in the family, in a group, in society, in the nation.” —J. Krishnamurti, The Collected Works of J. Krishnamurti, Volume V, p. 339

“By a peculiar weakness of human nature, people generally think too much about the opinion which others form of them; although the slightest reflection will show that this opinion, whatever it may be, is not in itself essential to happiness.” —Arthur Schopenhauer, The Wisdom of Life

“Do not wish to be anything but what you are.” —Saint Francis de Sales

“Don’t be afraid of discovering that the ‘real you’ may be different than the ‘current you’.” —Rabbi Noah Weinberg

“Don’t regard what anyone says of you, for this, after all, is no concern of yours.” —Epictetus, Enchiridion

“Every normal person, in fact, is only normal on the average. His ego approximates to that of the psychotic in some part or other and to a greater or lesser extent.” —Sigmund Freud

“For by grace are ye saved through faith; and that not of yourselves: it is the gift of God:” —Ephesians 2:8

“Further, the ‘self’, as defined can be no thing but a bundle of perceptions, not a new simple ‘thing’. In this, I think any thoroughgoing empiricist must agree with Hume.” —Bertrand Russell, The History of Western Philosophy

“Happy is he who has overcome his ego.” —Buddha

“He who soars not suffers no fall.” —Taoist saying

“If you must be something, then be empty and weak, so you are meek.” —Kevin Everett FitzMaurice

“It is especially stupid to think that you are special.” —Kevin Everett FitzMaurice

“LORD, thou wilt ordain peace for us: for thou also hast wrought all our works in us.” —Isaiah 26:12

“Most people are other people. Their thoughts are someone else’s opinions, their lives a mimicry, their passions a quotation.” —Oscar Wilde

“Nobody is so miserable as he who longs to be somebody other than the person he is.” —Angelo Patri

“Our ideas of self are created by identification. The less we cling to ideas of self, the freer and happier we will be.” —Jack Kornfield

“Perverse disputings of men of corrupt minds, and destitute of the truth, supposing that gain is godliness: from such withdraw thyself.” —I Timothy 6:5

“Pursue the light and you lose its source.” —Buddhist saying

“The greatest thing in the world is to know how to belong to oneself.” —Michel de Montaigne

“The highest courage is to dare to appear to be what one is.” —John L. Spalding

“The question of whether we are also aquatinted with our bare selves, as opposed to particular thoughts and feelings, is a very difficult one, upon which it would be rash to speak positively.” —Bertrand Russell, The Problems of Philosophy

“The philosophy behind much advertising is based on the old observation that every man is really two men —the man he is and the man he wants to be.” —William Feather

“There is always a certain peace in being what one is, in being that completely.” —Ugo Betti

“This is the very worst wickedness, that we refuse to acknowledge the passionate evil that is in us. This makes us secret and rotten.” —D. H. Lawrence

“Thou blind Pharisee, cleanse first that which is within the cup and platter, that the outside of them may be clean also.” —Matthew 23:26

“Unless, of course, you insist on identifying yourself with the people and things you love; and thereby seriously disturb yourself.” —Albert Ellis and Robert A. Harper, A Guide to Rational Living, Third Edition, p. 175

“We all want to be famous people, and the moment we want to be something we are no longer free.” —J. Krishnamurti

“We are always getting ready to live, but never living.” —Ralph Waldo Emerson

“What you don’t know can’t hurt your ego, but it can hurt your ability to survive or thrive.” —Kevin Everett FitzMaurice

“Whenever I climb I am followed by a dog called ‘Ego’.” —Friedrich Nietzsche

“You can grow and develop your ego but not your self.” —Kevin Everett FitzMaurice

“You did not create your self; therefore, you cannot change your self.” —Kevin Everett FitzMaurice

“You never exist quite so much as when you are not thinking.” —Friedrich Nietzsche, 1844-1900, German philosopher

5 Levels of Ego Infect Your Life 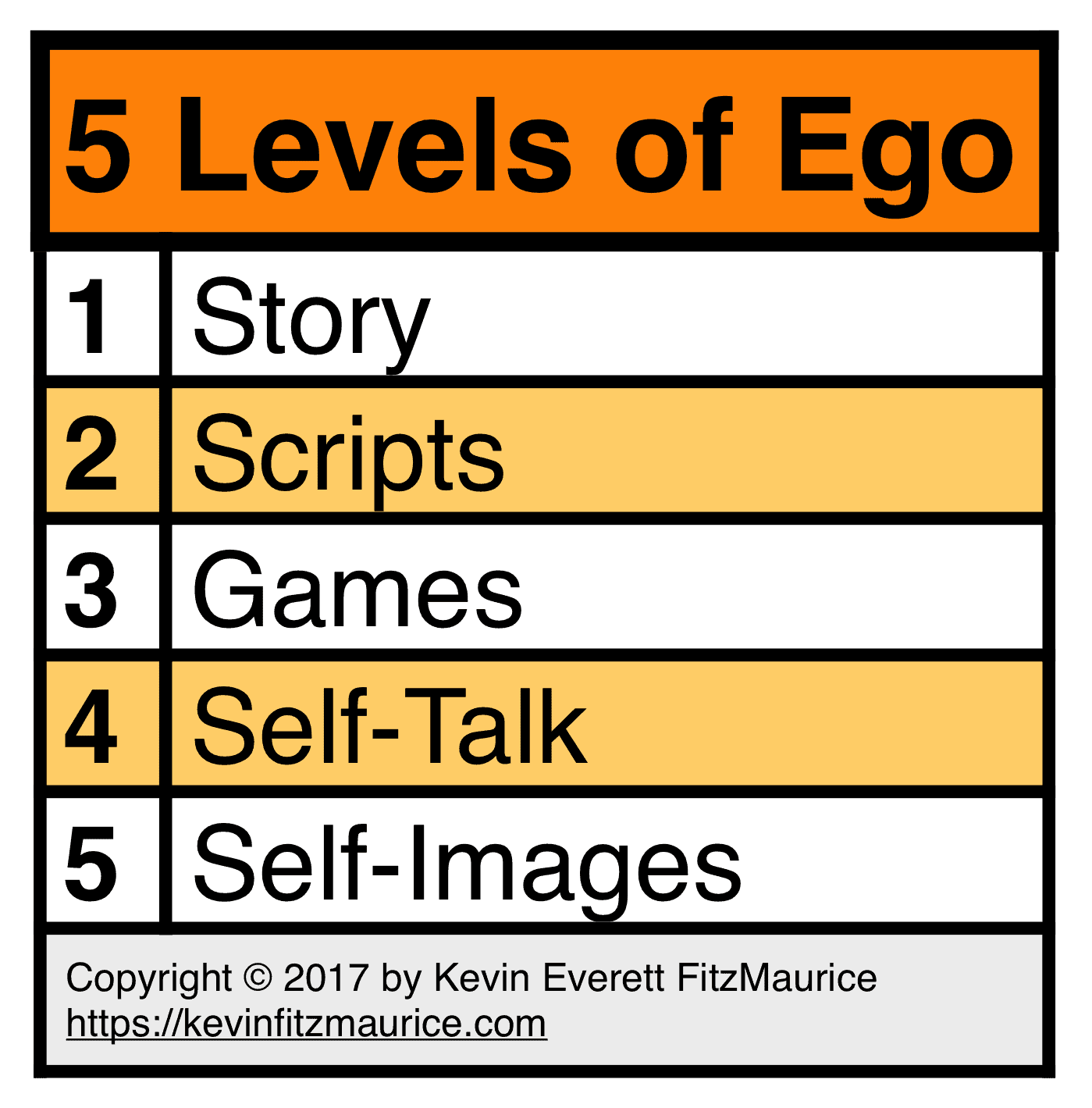