Blaming is the problem, not the solution. Here are many quotations from many sources expressing the idea that blaming is destructive.

Blaming Is the Problem More Often than Not 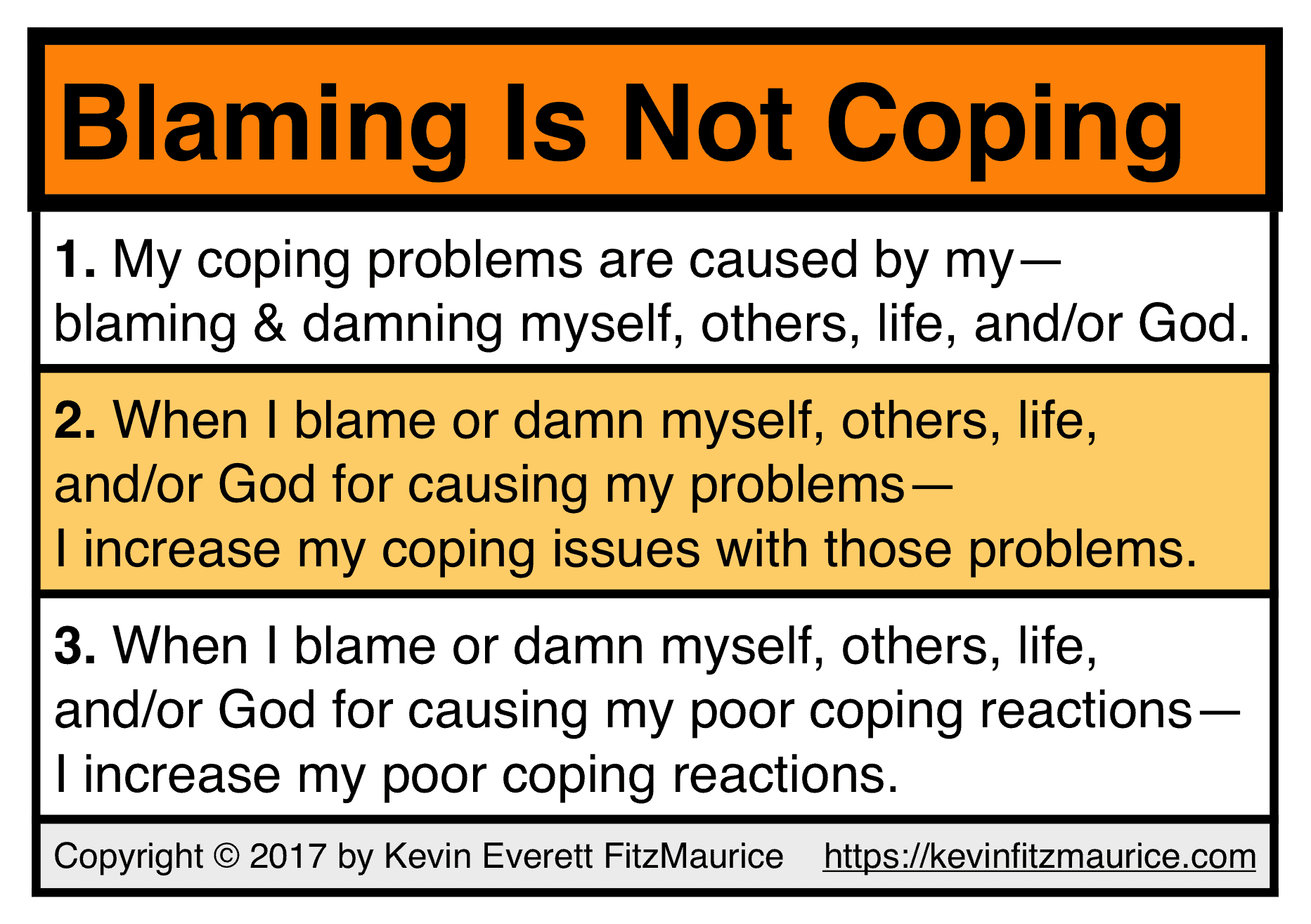 “A man can get discouraged many times but he is not a failure until he begins to blame somebody else and stops trying.” —John Burroughs

“A man may fall many times but he won’t be a failure until he says someone pushed him.” —Elmer G. Letterman

“A man should never be ashamed to own he has been in the wrong, which is but saying, in other words, that he is wiser today than he was yesterday.” —Alexander Pope

“All blame is a waste of time. No matter how much fault you find with another, and regardless of how much you blame him, it will not change you.” —Wayne Dyer

“And be silent for the most part, or else make only the most necessary remarks, and express these in few words. But rarely, and when occasion requires you to talk, talk, indeed, but about no ordinary topics. Do not talk about gladiators, or horseraces, or athletes, or things to eat or drink–topics that arise on all occasions; but above all, do not talk about people, either blaming, or praising, or comparing them.” —Epictetus, Enchiridion

“As long as the mind is in conflict–blaming, resisting, condemning–there can be no understanding. If I want to understand you, I must not condemn you, obviously.” —J. Krishnamurti, The Collected Works of J. Krishnamurti, Volume V, page 51

“Be slow to anger, slow to blame, And slow to plead thy cause. But swift to speak of any gain That gives thy friend applause.” –Mary Whitcher, Shaker member

“Before we blame we should first see whether we cannot excuse.” —George C. Lichtenberg

“Do not look at the faults of others, or what others have done or not done; observe what you yourself have and have not done.” —Dhammapada, 4:4

“Fix the problem, not the blame.” —Catherine Pulsifer

“Hate is like acid. It can damage the vessel in which it is stored as well as destroy the object on which it is poured.” —Ann Landers

“Hatreds do not ever cease in this world by hating, but by love; this is an eternal truth.” —Dhammapada, 1:5

“I praise loudly, I blame softly.” —Catherine II of Russia

“If you could kick the person in the pants responsible for most of your trouble, you wouldn’t sit for a month.” —Anonymous

“Make every effort not to indulge in negative thoughts, cruel words, and bad deeds.” —Dhammapada: The Right Way, verse 281

“Never succumb to the temptation of becoming bitter. As you press for justice, be sure to move with dignity and discipline, using only the instruments of love.” —Martin Luther King Jr.

“No one is a failure until they blame somebody else.” —Charles (Tremendous) Jones

“Overcome anger by love, overcome evil by good. Overcome the miser by giving, overcome the liar by truth.” —Dhammapada,17:3

“Teaching the principle of emotional responsibility can be one of the hardest tasks in REBT as clients may have habitually blamed others for their problems and now the therapist is pointing to the true source of their emotional problems–themselves.” —Michael Neenan and Windy Dryden, Rational Emotive Behavior Therapy: Advances in Theory and Practice, page 43

“The search for someone to blame is always successful.” —Robert Half

“There can be no doubt that the average man blames much more than he praises. His instinct is to blame. If he is satisfied he says nothing; if he is not, he most illogically kicks up a row.” —Arnold Bennett

“There’s man all over for you, blaming on his boots the fault of his feet.” —Samuel Becket

“Three core irrationalities: A philosophy of self-denigration, an intolerance of frustration, a blaming and condemning of others.” —Walen, S., R., DiGiuseppe, R., and Dryden, W. (1992), A Practitioner’s Guide to Rational-Emotive Therapy (2nd edition), p.128

“To find a fault is easy; to do better may be difficult.” —Plutarch

“When we blame, we give away our power.” —Greg Anderson

“When you blame others, you give up your power to change.” —Dr. Robert Anthony

“You can overcome anything if you don’t bellyache.” —Bernard M. Baruch

“You will become a teacher of yourself when for the same things that you blame others, you also blame yourself.” —Diogenes of Sinope, fragment

Blaming Is the Problem Quotations from Kevin Everett FitzMaurice

“Damning people for their crimes is the bigger crime.” —Kevin Everett FitzMaurice

“There is only one human species, to damn any member of that species is to damn the entire species.” —Kevin Everett FitzMaurice

“To condemn anyone is to condemn not only everyone, but their maker too.” —Kevin Everett FitzMaurice

“To damn anyone requires that you first damn your self.” —Kevin Everett FitzMaurice

“Whining, blaming, and damning is throwing dust into the wind only for it to return to hurt your eyes.” —Kevin Everett FitzMaurice