Instead of Worry: Pray, Problem-Solve, or Cope

Worry wastes your time and energy and often has negative results. Here are three alternatives you can spend your limited time!

“Peace I leave with you, my peace I give unto you: not as the world giveth, give I unto you. Let not your heart be troubled, neither let it be afraid.” —John 14:27

Instead of Worry, Do One of these Three:

Your 2 Healthy Options when You Have Problems 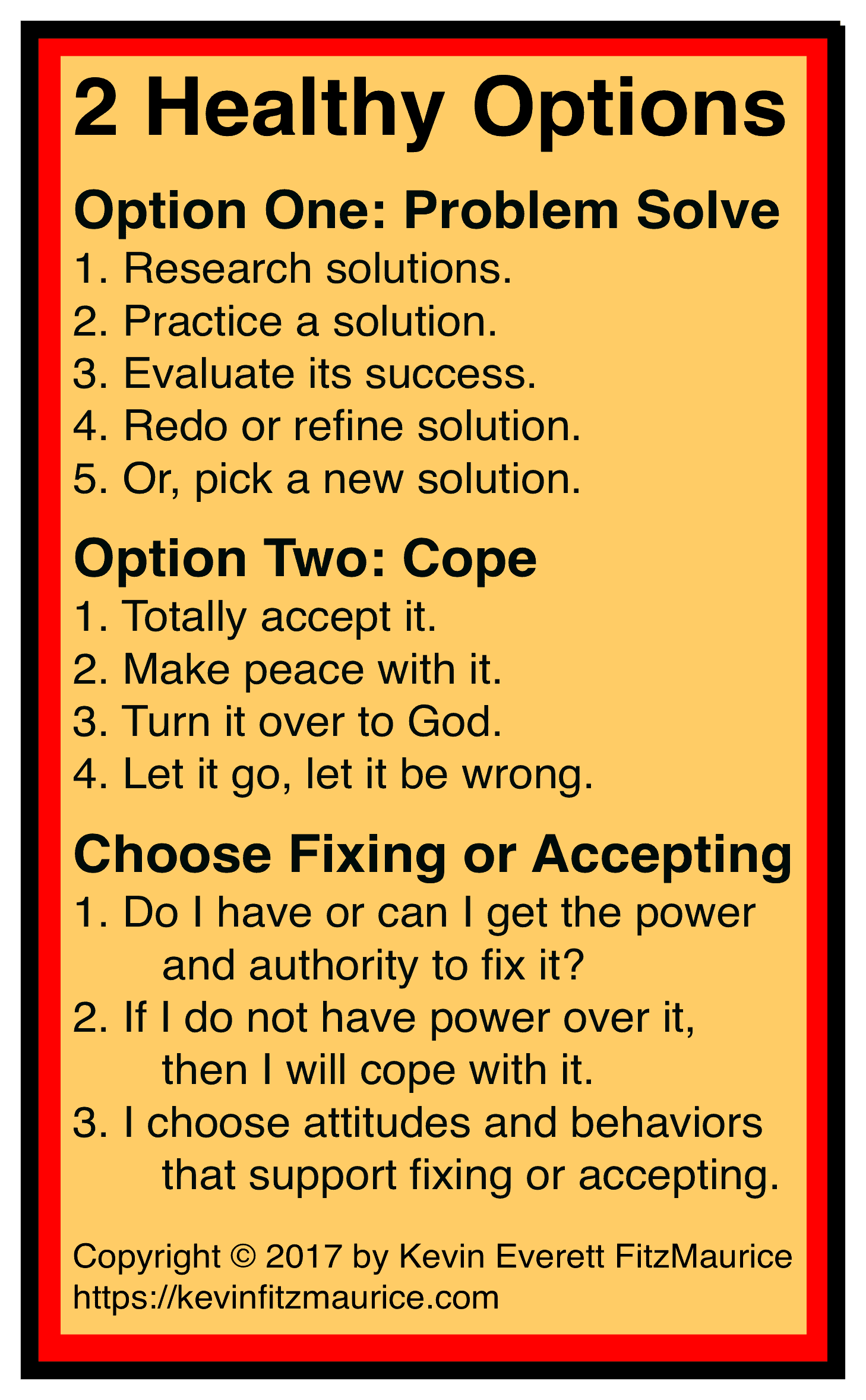 “A day of worry is more exhausting than a day of work.” —John Lubbock

“All fear is bondage.” —Anonymous

“All men’s gains are the fruit of venturing.” —Herodotus

“Anxiety is a good tool but a bad master.” —Kevin Everett FitzMaurice

“Anxiety is only the problem when it’s the solution.” —Kevin Everett FitzMaurice

“Be afraid of what God thinks of you but no person.” —Kevin Everett FitzMaurice

“Be willing to trust your instincts, especially if you cannot find answers elsewhere.” —Brian Koslow

“Convince yourself that worrying about many situations will make them worse rather than improve them.” —Albert Ellis and Robert A. Harper, A Guide to Rational Living, Third Edition, p. 174

“Courage is the ladder on which all other virtues mount.” —Clare Booth Luce

“Courage is the most important of all virtues, because without it we can’t practice any other virtue with consistency.” —Maya Angelou

“Danger can never be overcome without taking risks.” —Latin proverb

“Don’t fight with the pillow, but lay down your head / And kick every worriment out of the bed.” —Edmund Vance Cooke

“Even with worry, you cannot make the future present.” —Kevin Everett FitzMaurice

“Every difficulty slurred over will be a ghost to disturb your repose later on.” —Frederic Chopin

“Every evening I turn my worries over to God. He’s going to be up all night anyway.” —Mary C. Crowley

“Everyone who got where he is had to begin where he was.” —Robert Louis Stevenson

“Fear is a noose that binds until it strangles.” —Jean Toomer

“Fear tastes like a rusty knife and do not let her into your house.” —John Cheever

“Fear to let fall a drop and you spill a lot.” —Malay proverb

“He who fears something gives it power over him.” —Arab proverb

“How much pain they have cost us, the evils which have never happened.” —Thomas Jefferson

“I have come to realize that all my trouble with living has come from fear and smallness within me.” —Angela L. Wozniak

“I like the man who faces what he must, / With steps triumphant and a heart of cheer; / Who fights the daily battle without fear.” —Sarah Knowles Bolton

“I’ve developed a new philosophy—I only dread one day at a time.” —Charlie Brown

“If matters go badly now, they will not always be so.” —Horace

“If you suppress grief too much it can well redouble.” —Moliere

“In fact most of what we call anxiety is overconcern about what someone thinks of you.” —Albert Ellis and Robert A. Harper,A Guide to Rational Living, Third Edition, p. 163

“It is never safe to look into the future with eyes of fear.” —E. H. Harriman

“Life is to be entered upon with courage.” —Alexis de Tocqueville

“My life has been full of terrible misfortunes, most of which never happened.” —Michel de Montaigne

“No human thing is of serious importance.” —Plato, The Republic

“One isn’t necessarily born with courage, but one is born with potential.” —Maya Angelou

“Only man clogs his happiness with care, destroying what is with thoughts of what may be.” —John Dryden

“Our only security is our ability to change.” —John Lilly

“People who constantly worry are a worry.” —Kevin Everett FitzMaurice

“People who continually doubt are to be doubted.” —Kevin Everett FitzMaurice

“People who do not show trust are untrustworthy.” —Kevin Everett FitzMaurice

“Real generosity toward the future lies in giving all to the present.” —Albert Camus

“Some people are making such thorough preparation for rainy days that they aren’t enjoying today’s sunshine.” —William Feather

“Some people are so afraid to die that they never begin to live.” —Henry Van Dyke

“The great majority of the things we now make ourselves panicked about are self-created ‘dangers’ that exist almost entirely in our own imaginations.” —Albert Ellis and Robert A. Harper,A Guide to Rational Living, Third Edition, p. 171

“The greatest griefs are those we cause ourselves.” —Sophocles

“The mere apprehension of a coming evil has put many into a situation of utmost danger.” —Luca

“The one permanent emotion of the inferior man is fear–fear of the unknown, the complex, the inexplicable. What he wants beyond everything else is safety.” —H. L. Mencken

“The one permanent emotion of the inferior man is fear–fear of the unknown, the complex, the inexplicable. What he wants above everything else is safety.” —H. L. Mencken

“There is only one meaning of life: the act of living itself.” —Erich Fromm

“To avoid criticism, do nothing, say nothing, be nothing.” —Elbert Hubbard

“Upon the plains of hesitation bleach the bones of countless millions, who when on the dawn of victory paused to rest, and there resting died.” —John Dretschmer

“We fail far more often by timidity than by over-daring.” —David Grayson

“We must have the courage to be happy.” —Henri Frederic Amiel

“We should not let our fears hold us back from pursuing our hopes.” —John F. Kennedy

“We will not know unless we begin.” —Howard Zinn

“When I look back on all these worries I remember the story of the old man who said on his deathbed that he had a lot of trouble in his life, most of which had never happened.” —Winston Churchill

“Who dares nothing, need hope for nothing.” —Johann Friedrich Von Schiller

“Worry is a darkroom where negatives develop.” —Anonymous

“‘Worry’ is a word that I don’t allow myself to use.” —Dwight D. Eisenhower

“Worry is the cross that we make for ourselves by over anxiety.” —Francois de Fenelon

“Worry is the interest paid on trouble before it falls due.” —W. R. Inge

“Worry itself is one of the most painful conditions.” —Albert Ellis and Robert A. Harper, A Guide to Rational Living, Third Edition, p. 165

“Worry splits you between your effort and your result.” —Kevin Everett FitzMaurice

“Worrying is like a rocking chair, it gives you something to do, but it gets you nowhere.” —Glenn

“You have to accept whatever comes, and the only important thing is that you meet it with courage and with the best that you have to give.” —Eleanor Roosevelt

“But seek ye first the kingdom of God, and his righteousness; and all these things shall be added unto you.” —Matthew 6:33

“As soon as Jesus heard the word that was spoken, he saith unto the ruler of the synagogue, Be not afraid, only believe.” —Mark 5:36

“But when Jesus heard it, he answered him, saying, Fear not: believe only, and she shall be made whole.” —Luke 8:50

“And he said unto his disciples, Therefore I say unto you, Take no thought for your life, what ye shall eat; neither for the body, what ye shall put on.” —Luke 12:22