Quotations from the Author on Transgenderism

Transgender & LBGT haters accuse everyone else of hate because they have mastered self-hate.

“Happiness does not come from having much but from being attached to little.” —Master Cheng Yen

“When man’s attachments are deep, then divine endowments are shallow.” —Chung Tzu 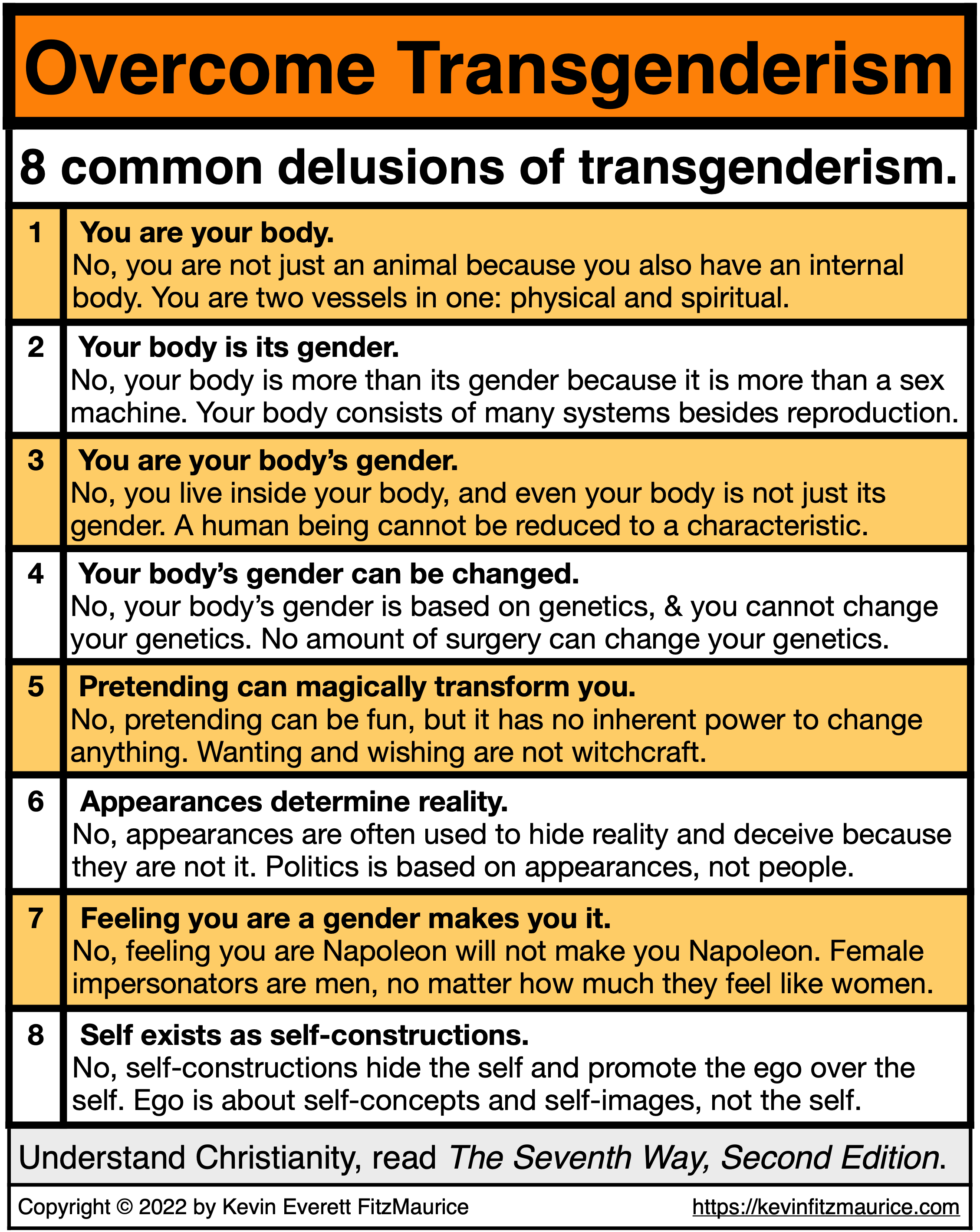 “The woman shall not wear that which pertaineth unto a man, neither shall a man put on a woman’s garment: for all that do so are abomination unto the Lord thy God.” —Deuteronomy 22:5

“And he answered and said unto them, Have ye not read, that he which made them at the beginning made them male and female,” —Matthew 19:4

“But from the beginning of the creation God made them male and female.” —Mark 10:6

“Wherefore God also gave them up to uncleanness through the lusts of their own hearts, to dishonour their own bodies between themselves:” —Romans 1:24

“For this cause God gave them up unto vile affections: for even their women did change the natural use into that which is against nature:” —Romans 1:26

“And likewise also the men, leaving the natural use of the woman, burned in their lust one toward another; men with men working that which is unseemly, and receiving in themselves that recompence of their error which was meet.” —Romans 1:27

“Know ye not that the unrighteous shall not inherit the kingdom of God? Be not deceived: neither fornicators, nor idolaters, nor adulterers, nor effeminate, nor abusers of themselves with mankind,” —I Corinthians 6:9

“Knowing this, that the law is not made for a righteous man, but for the lawless and disobedient, for the ungodly and for sinners, for unholy and profane, for murderers of fathers and murderers of mothers, for manslayers, For whoremongers, for them that defile themselves with mankind, for menstealers, for liars, for perjured persons, and if there be any other thing that is contrary to sound doctrine;” —I Timothy 1:9-10

“Even as Sodom and Gomorrha, and the cities about them in like manner, giving themselves over to fornication, and going after strange flesh, are set forth for an example, suffering the vengeance of eternal fire.” —Jude 1:7

“Impersonating a woman does not make you a woman.” —Kevin Everett FitzMaurice

“Wearing a dress does not a woman make.” —Kevin Everett FitzMaurice

“Transgender people do not exist because no one can genetically transform from one sex into another.” —Kevin Everett FitzMaurice

The consistency of wokeism is overwhelming. Wokeism claims gender does not exist and is just a social construct. Wokeism claims people can change genders for “trans” reasons. Which is it?

My dictionary defines sex as “Either of the two divisions, designated female and male, by which most organisms are classified on the basis of their reproductive organs and functions.” So gender and sex are the same by definition. However, people love to twist words for the sake of political agendas.

Often, such political agendas are designed to destroy society by destroying sexual identity and the family. Some of us see more to life than acting as corporate slaves, and we get this meaning from family, society, and religion—all of which insane, angry, and violent people are against as they are most things. Destroyers don’t build or contribute.

Also, you need to check facts instead of political dogma because transitioning does not result in better outcomes for confused people who have the mental illness of gender dysphoria. People also have race dysphoria, but people learn to adapt, adjust, and develop with proper guidance instead of being used as political pawns. Inconvenient trans truths: https://www.hli.org/resources/what-percentage-of-transgenders-regret-surgery/

To claim freedom of speech allows firefighters, police officers, and kindergarten teachers to talk about whatever they want while on the job is to fail to understand the boundaries and limits of their job descriptions. If we need to pass laws to remind them of their roles, then so be it.