How To Stop Whiners 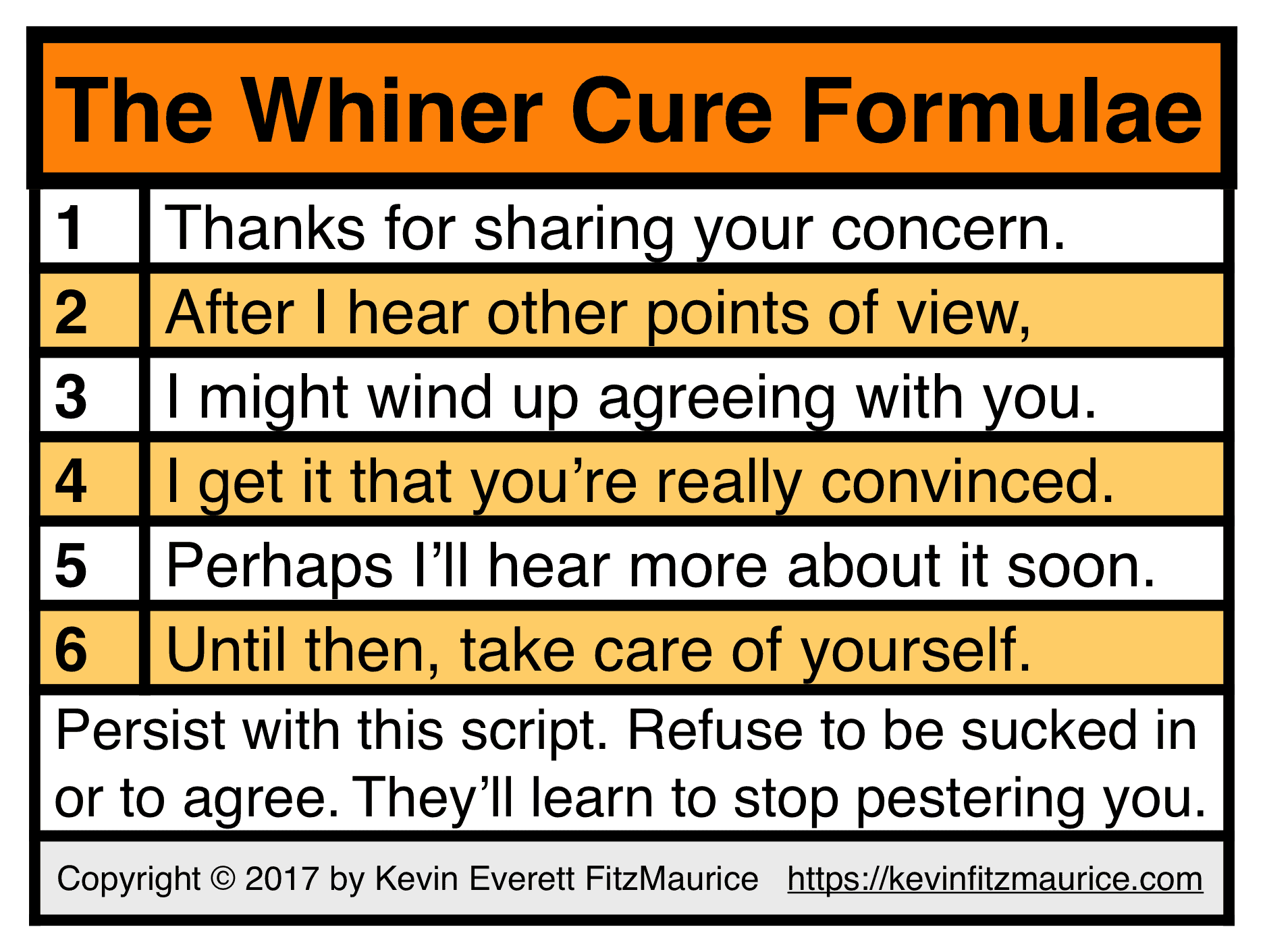 Ask to Hear Both Sides Before Passing Judgment

Do you hate it when they whine, complain, moan, & groan?

Do you hate it when they whine and say—?

Don’t you want to graciously stop them from wasting your time and using you to confirm their distorted views?

Memorize the Three Parts of this Line:

Stick to this line each time they whine. They will soon stop bothering you and move on to annoying and distressing others.

Here are three alternative lines with the same intention and meaning. Feel free to make your own variation.

Find one or makeup one that suits your personality and style and stick to it.

“I don’t have enough information to judge your situation nor do I want to judge it—can we please change the subject?”

“The simple truth is I don’t want to judge or damn another because it’s bad for my soul.”

“Sounds like you could use some comforting and soothing to boost your acceptance and coping with that.”

“Perhaps you should focus on taking care of yourself by eating, exercising, and sleeping right.”

People are not as hard to figure out as you might suspect. The following generalizations are general and not specific; therefore, they inherently recognize that they do not cover all situations or specifics.

People who continually whine about a value or moral not being followed–do not follow that moral or value themselves.

People who whine about something use the fact of their whining as an excuse to not have to follow the very thing that they are complaining others do not follow.

Does this whining about whining mean that I am a whiner?

Now, I can choose to whine constructively, to whine less, and to be a responsible whiner.

Yes, you can whine constructively when you do so to get help to fix a problem such as a leaking roof, the local river being poisoned, or to get help with a fire.

Difficult People: How to Handle

Double-Binds: How to Respond to Them

“Difficulties are things that show what men are.” —Epictetus

“So I’d better stop my whining and help myself cope better with even the worst Adversities.” –Albert Ellis and Robert A. Harper, A Guide to Rational Living, Third Edition, p. 251

“Whining about your own, others’, or the world’s failings is a main element in what we usually call neurosis.” —Albert Ellis and Robert A. Harper, A Guide to Rational Living, Third Edition, p. 215

“Why make the game of life more difficult by fretting and whining about its unfairness. Do–don’t stew!” —Albert Ellis and Robert A. Harper, A Guide to Rational Living, Third Edition, p. 165