How To Handle Difficult People 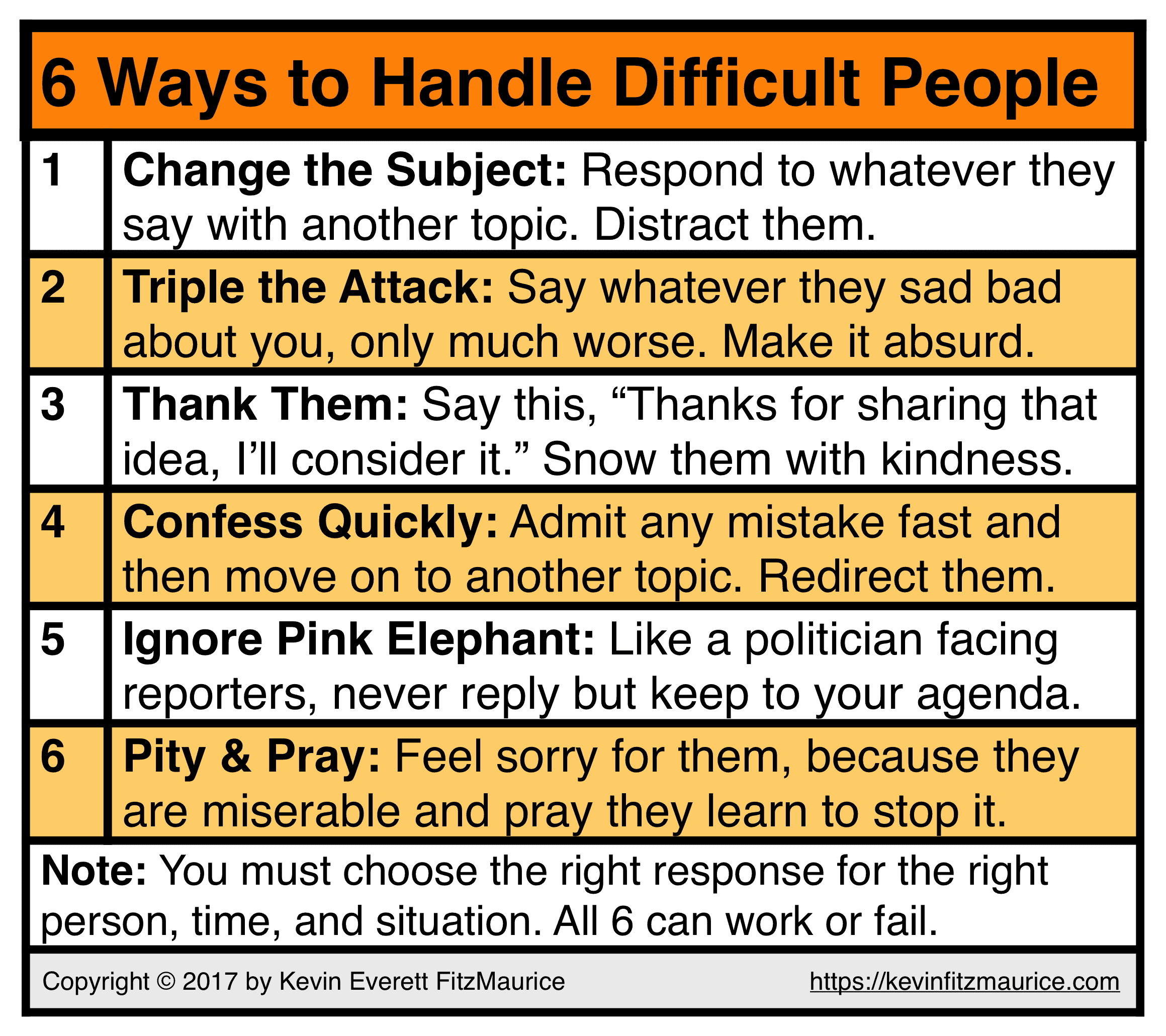 6 Strategies: Choose the Right One

Who Are Difficult People?

“A sinful man disquieteth friends, and maketh debate among them that be at peace.” —Ecclesiasticus 28:9

This means that you choose not to respond to what they said in any way. Instead, you start to talk about something else as if they had not said anything. You will be surprised how often this works.

This means that you insult yourself worse. For example, if they say, “You are slow,” then you say, “Yeah, I’m so slow that the snails are passing me by.” By exaggerating the attack you defuse it. So make a joke of it by tripling it!

This technique often works well. What you do is to thank them for their input and say that you will consider it. This lets you off the hook and promises nothing but what you would do anyway. For instance, “Thanks for sharing that, I’ll consider it.” Yes, I’ll consider just how nutty or rude it was!

This means that you readily admit your mistake, apologize, and move on. Do not dwell on it. Keep it short, direct, and simple. Then talk about something else. Confess then redirect.

The idea here is to totally ignore the unwanted attacks, double binds, emotional blackmail, and conversation that you do not want to engage in. Do not recognize it. Do not respond to it. Do not argue, defend, protest, comment, or in any way acknowledge the place the other person is coming from.

Keep on your subject and talking about nothing related and nothing of any importance: unrelated small talk. It is like having a pink elephant in your living room that you pretend is not there. Naturally, the other person will escalate and become angry that they are no longer hooking you or “pushing your buttons”. Take their complaints as encouragement that the technique is working.

This is similar to how politicians handle the press. The politician says whatever they have on their agenda no matter what questions they are asked. The politician wisely ignores the questions or agenda of the newscaster or reporter, because their questions are basically traps or attempts to create conflict.

One way to stay sane and keep a good attitude is to pity the person who has a difficult way of relating to others. By feeling sorry for them, you take away their power and move to the higher value of compassion.

Consider that they must suffer their style in their mind, in their self-talk, at home, at work, with family and friends, and how difficult a life they must have. Pray for them to be under God instead of such a negative attitude, approach, and style. Remember, they have the same human nature, and you could also easily be acting in the same self-defeating fashion.

“Against criticism a man can neither protest nor defend himself; he must act in spite of it, and then it will gradually yield to him.” —Johann Wolfgang von Goethe (1749-1832)