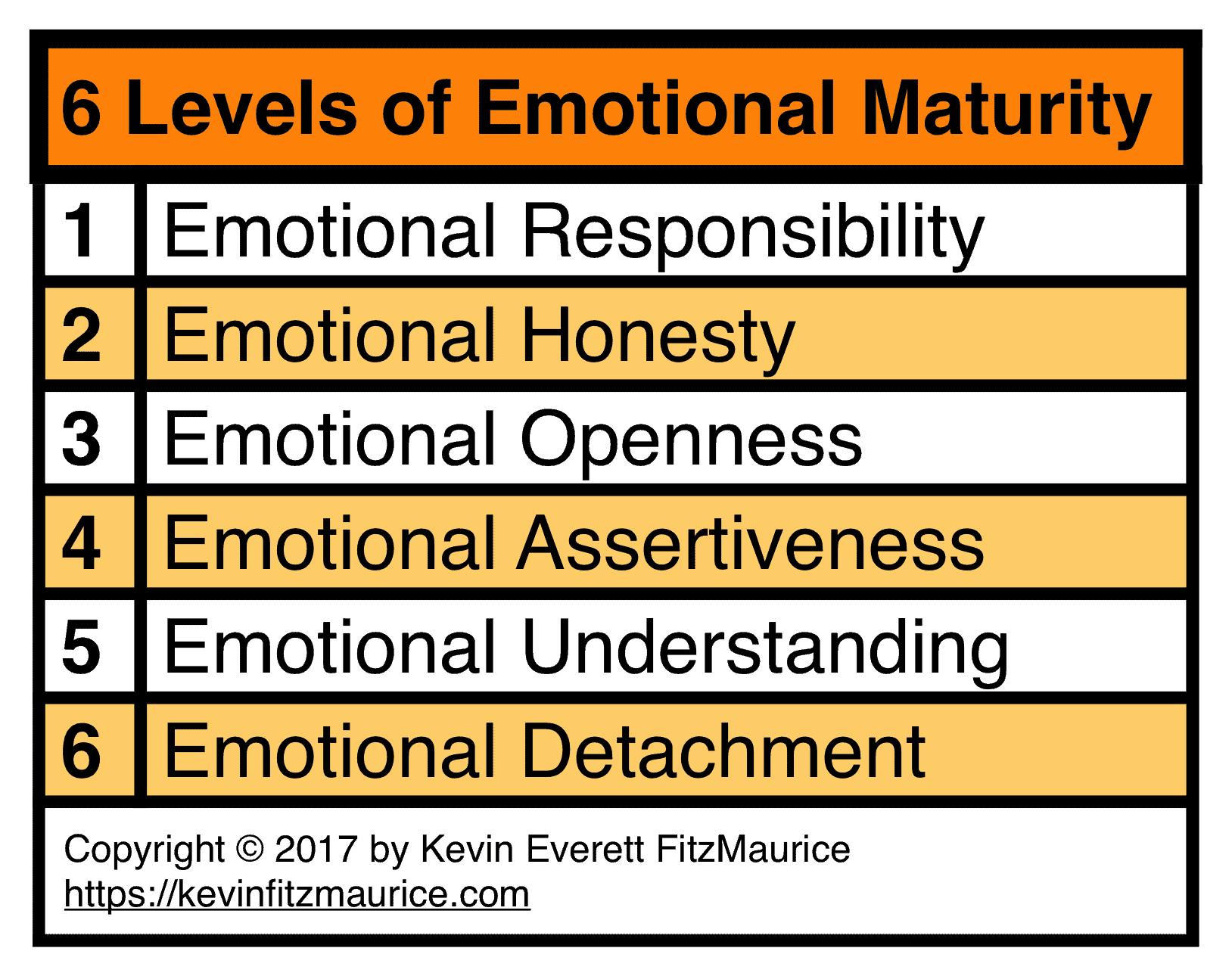 Emotional Maturity Is Your Choice for Your Happiness

When a person reaches level one of emotional maturity, then he or she realizes that he or she can no longer view his or her emotional states as the responsibility of external forces such as people, places, things, forces, fate, and spirits. He or she learns to drop expressions from his or her speech that show disownership of feelings and a helpless or victim attitude towards his or her feelings.

People at this level of emotional maturity regularly use the following two expressions:

As time and maturity advance, they begin to use even more accurate statements that inhibit the Blame Game, such as:

Emotional honesty concerns the willingness of a person to know and own his or her feelings. This is a necessary step to self-acceptance and self-understanding. The issue of resistance to self-discovery is dealt with at this level. Resistance issues stem from the person’s conscious and unconscious fears of dealing directly with the critical voices he or she hears inside his or her mind.

When people don’t learn emotional coping skills, they generally lose most interactions with their internal adversary, internal critic, negative self-talk, or hyperactive conscience. Therefore, people’s fears of emotional honesty are based on past ego pain from being internally judged as worse than, lower than, or inferior to others.

In this context, the meaning of the maxim is that you are always true to what you feel. At this level of emotional maturity, you do not hide, stuff, suppress, or repress what you feel, but you honestly experience what you feel. You are at least honest with yourself about how you really feel despite what you are supposed to feel.

As a secondary goal on this level, people learn to locate others with whom they can safely share their real feelings, their real selves, in an accepting and supporting manner. At this level, the work is also begun to never again accept self as your behaviors or experiences. If you act like a dog forever, you will still never become a dog.

Similarly, you will never become stupid from acting stupid. But you might want to focus on switching your stupid thinking for more realistic and effective thinking.

This level concerns a person’s willingness to share and skills in sharing his or her feelings in an appropriate manner and at appropriate times. Persons at this level experience and learn the value of ventilating feelings to let feelings go, and also the dangers involved in hiding feelings from self and others.

Self-disclosure is the important issue at this level of emotional maturity. Yet, self-disclosure will never be as important as the willingness of the person to be open to experiencing all of his or her feelings as they arise without the critical voices he or she hears inside trying to change, control, or condemn those feelings.

At this level of emotional maturity, a person has the openness and freedom to experience any emotion without the need or compulsion to suppress or repress it. The suppression and repression of emotions is to protect the ego from harm and to protect the self from the ego pain that comes when the ego is harmed.

A person at this level of work enters a new era of positive self-expression. The primary goal here is to be able to ask for and to receive the nurturing that he or she needs and wants—first from self and then from others.

He or she asserts his or her emotional needs in all of his or her relationships if it is safe to do so. As a secondary goal, he or she also learns how to express any feeling appropriately in any situation. (For example, how to express a feeling without aggressive or manipulative overtones.)

A person at this level of emotional maturity makes time for his or her feelings–he or she prizes and respects those feelings. Such people understand the connections between suppressed feelings, negative stress, and illness.

Some actions that can be characterized as emotional assertiveness include:

Because of the nature of knowledge and the formation of self-concepts, such people experience firsthand, that all self-concepts contain their opposites. Knowing that one half of some self-concept duality is still active in him or her even if he or she hide it in darkness (unconsciousness), he or she begins to regularly leap beyond the pitfalls of self-concepts, self-images, and self-constructs.

Other understandings at this level include the following:

At this level, the person lives without the burden and snare of self-concepts, self-images, self-constructs, group-concepts, and thing-concepts. Such a person is only aware of self as a process, as a sensing being, as an experiencing being, as a living vessel, as unknowable and untrappable—because self is alive and not static or fixed.

(For a method and a plan for overcoming your ego, please read FitzMaurice’s book Ego.)

“The emotionally mature individual should completely accept the fact that we live in a world of probability and chance, where there are not, nor probably ever will be, any absolute certainties, and should realize that it is not at all horrible, indeed—such a probabilistic, uncertain world.” ―Albert Ellis

“To a large extent, I can control my feelings and desires and can change them so that I lead a happier existence.” —Albert Ellis and Robert A. Harper, A Guide to Rational Living, Third Edition, p. 247

“Your parents, friends, and culture often encouraged you to damn yourself, others, and the world. In spite of your biology, your family, and your culture, you don’t need to stupidly disturb yourself.” —Albert Ellis