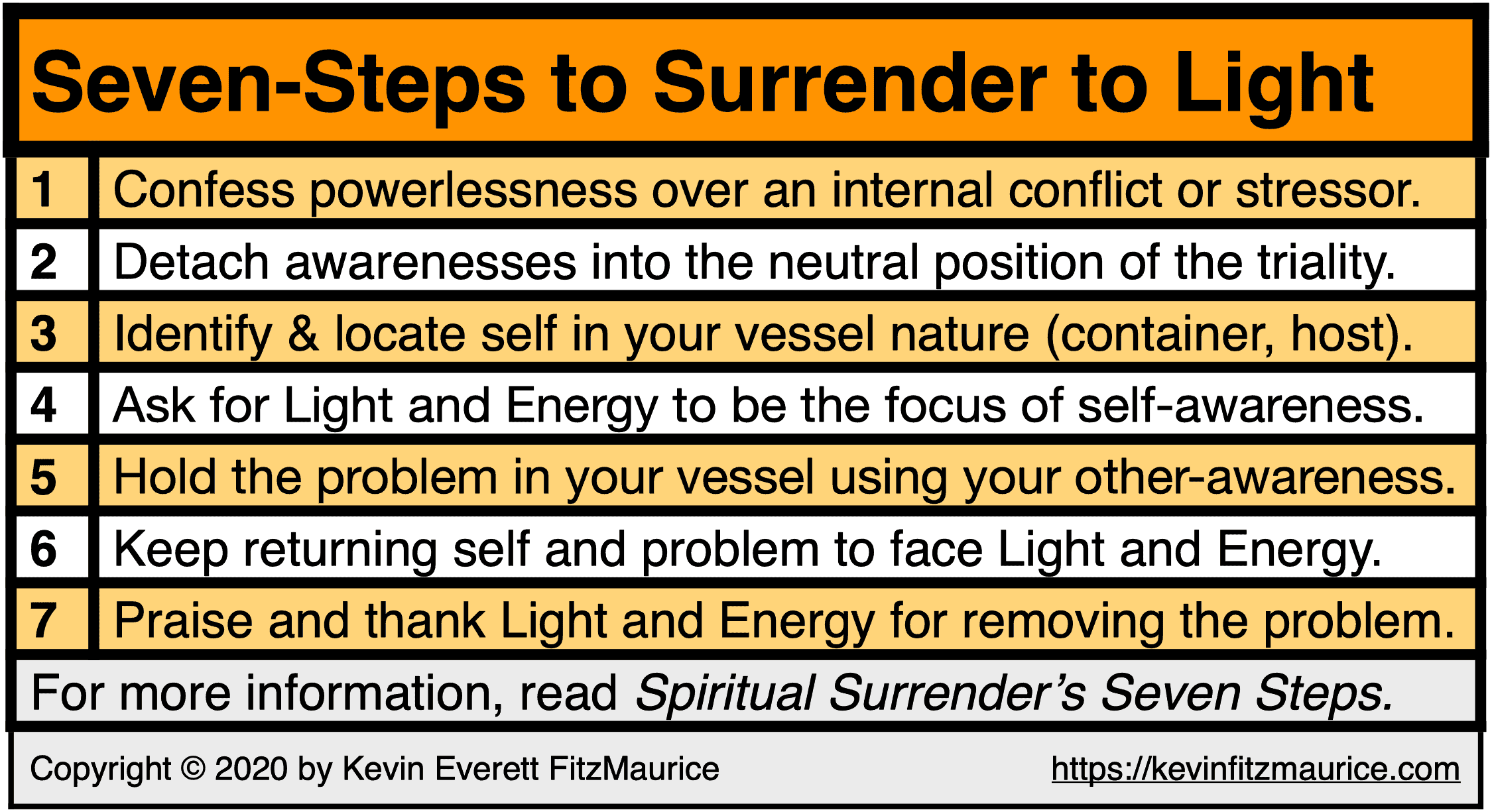 7 Steps to Freedom from Psychological Problems

“Move your self out of the problem (positive versus negative) into the neutral space in-between the problem from where you can help the problem resolve in the best possible way.” —Kevin Everett FitzMaurice

Note: These steps are refined and updated in Spiritual Surrender’s Seven Steps.

Information Required to Understand the 6 Steps to Freedom

Information about the 7 Steps to End Psychological Problems

1. You recognize and confess that you are powerless over an internal conflict. (The conflict takes the form of a duality between a should-be and a should-not-be.)

2. You move both of your attentions to the neutral position for the should-be and the should-not-be.

3. You move both your awarenesses to your vessel nature (host, container).

4. You ask for the Light and Energy to come into you so that you can focus your awareness-of-self on them.

5. You focus your awareness of other on the problem.

6. You keep returning the problem to the Light and Energy until it dies.

A Variation of the Seven Steps

1. Make the part that is trying to fix the problem move into the neutral position from the should-not-be position.

2. Make the part that is the problem (what is) yours.

3. Make God the solution, the should-be.

4. Bring the problem to God and hold it there and keep redirecting it there when it wanders.

4 Necessary Conditions for the 7 Steps to Work

“Neutral for me and health for the problem.” —Kevin Everett FitzMaurice

“The neutral is neither good nor bad but the anticipation of good or bad.” —Kevin Everett FitzMaurice

“The soul must wait in the neutral space of neither experience nor no-experience for the heart to reveal itself through hosting or magnifying something.” —Kevin Everett FitzMaurice

1. The magic question is, “What is the neutral position?”

2. This question is magical because it moves you out of duality and into triality, where conflicts and problems take on a new light.

3. The magic move is to take the neutral position while supporting the positive position.

4. The magic move is to stay in the neutral position while feeding the positive position.

5. This move is magical because it keeps you out of the conflict while also allowing you to support the solution.

1. The magic practice is to keep returning to the neutral position in order to keep yourself out of the conflict between the opposites.

2. The magic practice is to keep faith, hope, and charity for the positive that it will drive out and overcome the negative.

3. The magic practice is to keep detaching from the battle and to keep turning the battle over to the Good, Energy, Light, and God.

4. A part of the magic practice is to keep your identity as the host for the battle and to refuse to try to fix the battle.

5. A part of the magic practice is to continue hosting the battle without trying to cover, deny, or disguise the battle.

1. When you identify with just one side (should-not-be or should-be), you have made the conflict unresolvable because you now have to die for the other side to win.

2. When you identify with just one side (should-not-be or should-be), you protect and reward your side with covering, denying, excusing, hiding, rationalizing, and reframing.

3. When you identify with both the should-not-be and the should-be, you have made the conflict the essential thing in your life because now you are trying to kill yourself so that only one side of you remains.

5. When you detach from the conflict, you move into a neutral space from which you can observe and monitor the conflict while choosing to influence the outcome based on reason and virtue. 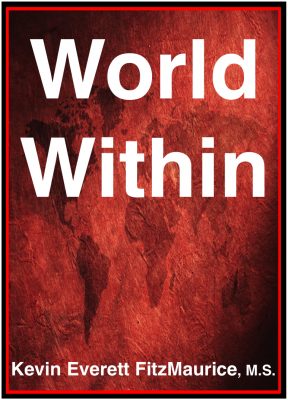