Buddha Failed in Many Ways 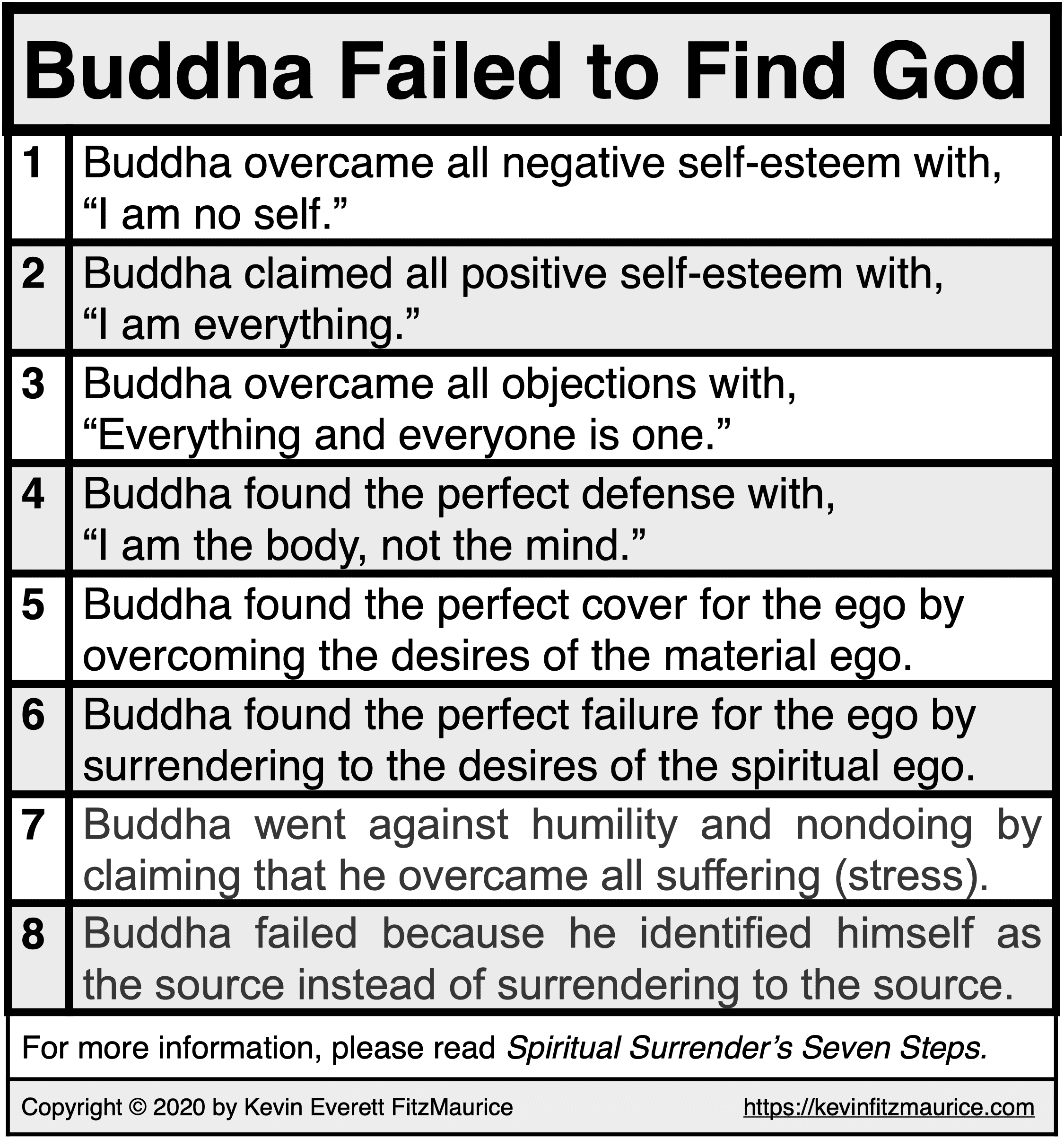 Buddha’s Many Failures Cause Worldwide Suffering

“Our virtues are, most often, only vices in disguise.” —Francois de La Rochefoucauld

“Spiritual sloth and spiritual greed will not stay hidden.” —Rumi

“Truth does not do as much good in the world as the appearance of it does evil.” —Francois de La Rochefoucauld

Buddha Failed: A List of Some of Buddha’s Failures

The list of Buddha’s failures is not organized according to any priority nor is it complete.

Buddha Failed to Find HImself

Buddha Failed to Find the Purpose of Life

Buddha Failed to Understand the Spiritual Principle of Nondoing

Buddha Was Wrong for 5 Reasons 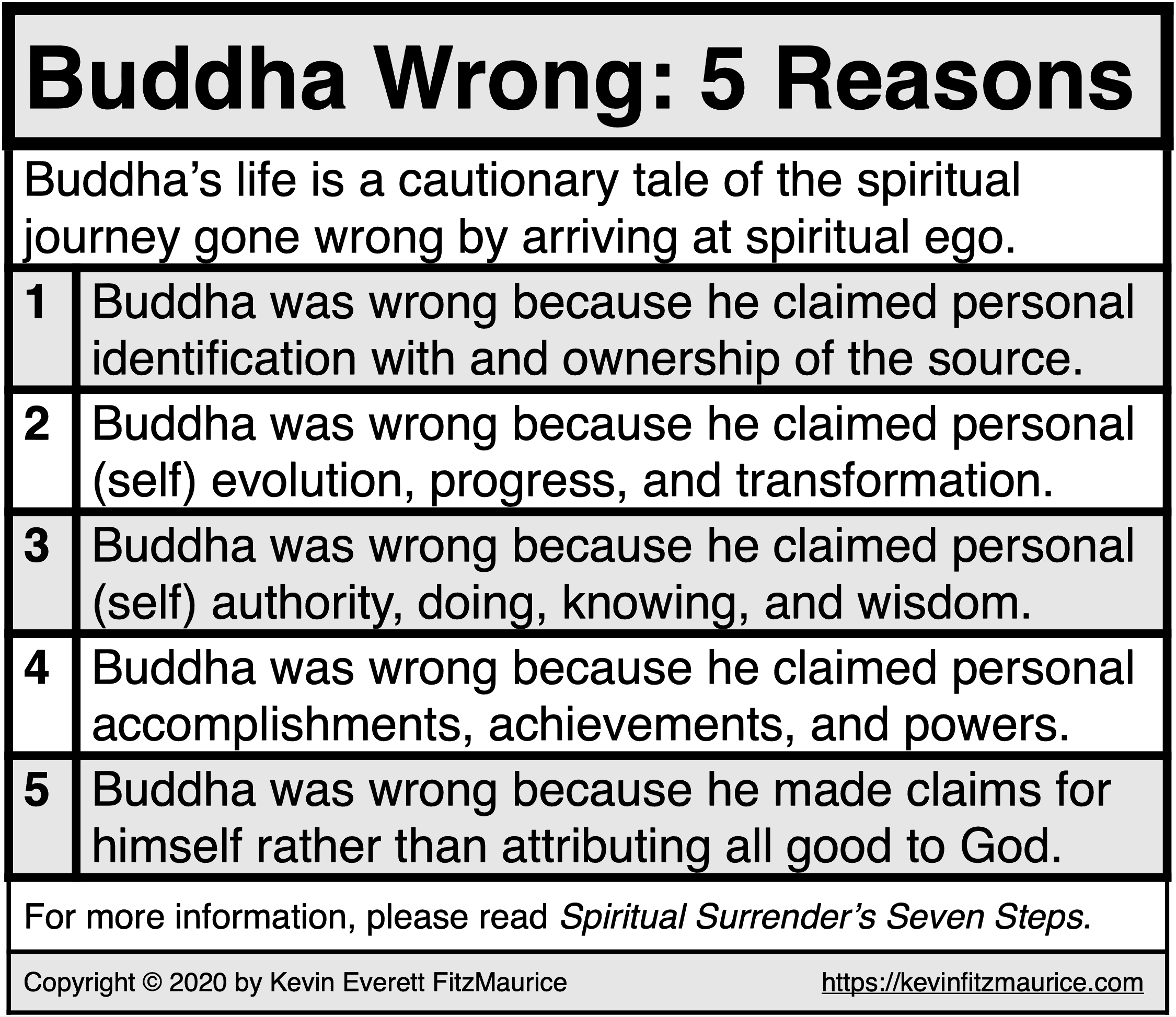 “Then saith Jesus unto him, Get thee hence, Satan: for it is written, Thou shalt worship the Lord thy God, and him only shalt thou serve.” —Matthew 4:10

“And he said unto him, Why callest thou me good? there is none good but one, that is, God: but if thou wilt enter into life, keep the commandments.” —Matthew 19:17

“And Jesus answered and said unto him, Get thee behind me, Satan: for it is written, Thou shalt worship the Lord thy God, and him only shalt thou serve.” —Luke 4:8

“So likewise ye, when ye shall have done all those things which are commanded you, say, We are unprofitable servants: we have done that which was our duty to do.” —Luke 17:10

“But he that doeth truth cometh to the light, that his deeds may be made manifest, that they are wrought in God.” —John 3:21

“John answered and said, A man can receive nothing, except it be given him from heaven.” —John 3:27

“Then answered Jesus and said unto them, Verily, verily, I say unto you, The Son can do nothing of himself, but what he seeth the Father do: for what things soever he doeth, these also doeth the Son likewise.” —John 5:19

“How can ye believe, which receive honour one of another, and seek not the honour that cometh from God only?” —John 5:44

“And I seek not mine own glory: there is one that seeketh and judgeth.” —John 8:50

“And immediately the angel of the Lord smote him, because he gave not God the glory: and he was eaten of worms, and gave up the ghost.” —Acts 12:23

“For I know that in me (that is, in my flesh,) dwelleth no good thing: for to will is present with me; but how to perform that which is good I find not.” —Romans 7:18

“So then it is not of him that willeth, nor of him that runneth, but of God that sheweth mercy.” —Romans 9:16

“That, according as it is written, He that glorieth, let him glory in the Lord.” —I Corinthians 1:31

“So then neither is he that planteth any thing, neither he that watereth; but God that giveth the increase.” —I Corinthians 3:7

“For who maketh thee to differ from another? and what hast thou that thou didst not receive? now if thou didst receive it, why dost thou glory, as if thou hadst not received it?” —I Corinthians 4:7

“But we have this treasure in earthen vessels, that the excellency of the power may be of God, and not of us.” —II Corinthians 4:7

“Casting down imaginations, and every high thing that exalteth itself against the knowledge of God, and bringing into captivity every thought to the obedience of Christ;” —II Corinthians 10:5

“I am become a fool in glorying; ye have compelled me: for I ought to have been commended of you: for in nothing am I behind the very chiefest apostles, though I be nothing.” —II Corinthians 12:11

“Every good gift and every perfect gift is from above, and cometh down from the Father of lights, with whom is no variableness, neither shadow of turning.” —James 1:17

“But if ye have respect to persons, ye commit sin, and are convinced of the law as transgressors.” —James 2:9

• Buddha overcame the materialistic ego but surrendered to the spiritual ego.

• Buddha committed suicide by eating a rotten piece of pork when he knew it would kill him.

• Buddha was psychotic because he thought he was everything but everything did not die when he did.

• Buddha had an existential crisis; and, based on that, he abandoned his wife and child and became a deadbeat dad.

• Buddha failed the spiritual test of humility when he pridefully identified with the Source instead of humbly submitting to the Source.

“Knowing yourself is the beginning of all wisdom.” —Aristotle

“Self-esteem is the modern name for ego, for the delusion that is at the core of all misery.” —Kevin Everett FitzMaurice