The ABCs of REBT 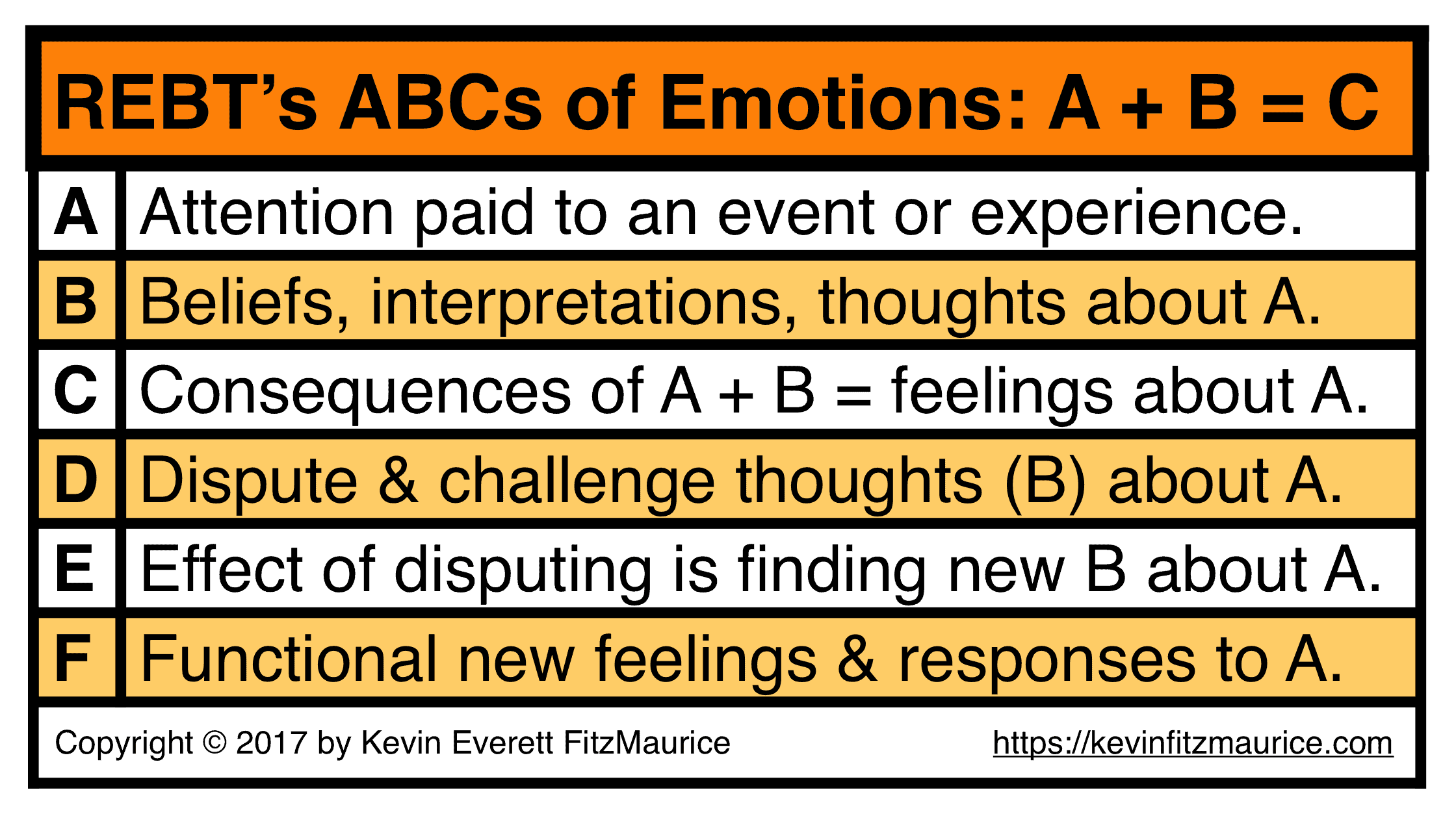 “Resolve to dismiss thy judgment about an act as if it were something grievous and thy anger is gone.” —Marcus Aurelius

LEARNING TO IDENTIFY As, Bs, Cs, & THEIR INTERRELATIONS

HELPS FOR DOING THE HOMEWORK

The A needs to be stated simply and cleanly.

The C needs to be stated in feeling words such as: glad, sad, mad, afraid, ashamed, lonely, hurt, guilty, distressed, contemptuous, surprised, disgusted, interested, joyous. You can have more than one feeling, but, for Phase 1, give no more than three. The C also needs to be given in a behavioral format, that is, what you did.

“Every man without passions has within him no principle of action, nor motive to act.” —Claude Helvetius

For 99¢ you can purchase The Secret of Maturity, Third Edition, which explores, explains, and encourages emotional responsibility.

“It’s so hard when I have to, and so easy when I want to.” —Annie Gottlier

“Peace is the result of retraining your mind to process life as it is, rather than as you think it should be.” —Wayne Dyer

“REBT exists to help when you think it is so horrible it hurts.” —Kevin Everett FitzMaurice

“When receiving correction, the wise seeks to learn and the fool seeks to justify with excuses.” —Kevin Everett FitzMaurice

Quotations from Scripture on Counseling

“A wise man will hear, and will increase learning; and a man of understanding shall attain unto wise counsels:” —Proverbs 1:5

“Where no counsel is, the people fall: but in the multitude of counselors there is safety.” —Proverbs 11:14

“The way of a fool is right in his own eyes: but he that hearkeneth unto counsel is wise.” —Proverbs 12:15

“Deceit is in the heart of them that imagine evil: but to the counselors of peace is joy.” —Proverbs 12:20

“Without counsel purposes are disappointed: but in the multitude of counselors they are established.” —Proverbs 15:22

“Hear counsel, and receive instruction, that thou mayest be wise in thy latter end.” —Proverbs 19:20

“Every purpose is established by counsel: and with good advice make war.” —Proverbs 20:18

“Take counsel, execute judgment; make thy shadow as the night in the midst of the noonday; hide the outcasts; bewray not him that wandereth.” —Isaiah 16:3

“Extol not thyself in the counsel of thine own heart; that thy soul be not torn in pieces as a bull [straying alone.]” —Ecclesiasticus 6:2

“As timber girt and bound together in a building cannot be loosed with shaking: so the heart that is stablished by advised counsel shall fear at no time.” —Ecclesiasticus 22:16

“A man of counsel will be considerate; but a strange and proud man is not daunted with fear, even when of himself he hath done without counsel.” —Ecclesiasticus 32:18

“And let the counsel of thine own heart stand: for there is no man more faithful unto thee than it.” —Ecclesiasticus 37:13

“Gold and silver make the foot stand sure: but counsel is esteemed above them both.” —Ecclesiasticus 40:25